Moving Image Theory
Ecological Considerations
Edited by Joseph D. Anderson and Barbara Fisher Anderson. Foreword by David Bordwell
Southern Illinois University Press, 2004
Blending unconventional film theory with nontraditional psychology to provide a radically different set of critical methods and propositions about cinema, Moving Image Theory: Ecological Considerations looks at film through its communication properties rather than its social or political implications. Drawing on the tenets of James J. Gibson’s ecological theory of visual perception, the fifteen essays and forty-one illustrations gathered here by editors Joseph D. Anderson and Barbara Fisher Anderson offer a new understanding of how moving images are seen and understood.
Focusing on a more straightforward perception of the world and cinema in an attempt to move film theory closer to reality, Moving Image Theory proposes that we should first understand how cinema communicates information about the representation of the three-dimensional world through properties of image and sound.
[more] 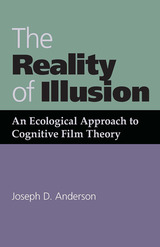 The Reality of Illusion
An Ecological Approach to Cognitive Film Theory
Joseph D. Anderson
Southern Illinois University Press, 1998
Applying research findings from studies in visual perception, neurophysiology, cognitive psychology, developmental psychology, and anthropology, Joseph D. Anderson defines the complex interaction of motion pictures with the human mind and organizes the relationship between film and cognitive science. Anderson’s primary argument is that motion picture viewers mentally process the projected images and sounds of a movie according to the same perceptual rules used in response to visual and aural stimuli in the world outside the theater. To process everyday events in the world, the human mind is equipped with capacities developed through millions of years of evolution. In this context, Anderson builds a metatheory influenced by the writings of J. J. and Eleanor Gibson and employs it to explore motion picture comprehension as a subset of general human comprehension and perception, focusing his ecological approach to film on the analysis of cinema’s true substance: illusion.

Anderson investigates how viewers, with their mental capacities designed for survival, respond to particular aspects of filmic structure—continuity, diegesis, character development, and narrative—and examines the ways in which rules of visual and aural processing are recognized and exploited by filmmakers. He uses Orson Welles’s Citizen Kane to disassemble and redefine the contemporary concept of character identification; he addresses continuity in a shot-by-shot analysis of images from Casablanca; and he uses a wide range of research studies, such as Harry F. Harlow’s work with infant rhesus monkeys, to describe how motion pictures become a substitute or surrogate reality for an audience. By examining the human capacity for play and the inherent potential for illusion, Anderson considers the reasons viewers find movies so enthralling, so emotionally powerful, and so remarkably real.