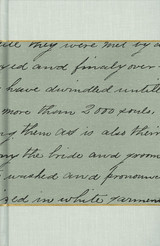 Anthony W. Ivins (1852-1934) migrated to St. George, Utah, at age nine where he later became an influential civic and ecclesiastical leader. He married Elizabeth A. Snow, daughter of apostle Erastus F. Snow. Ivins was a first cousin of Heber J. Grant, and served as his counselor while Grant was LDS president. Ivins filled several Mormon missions to Mexico and presided as the Juarez, Mexico stake president where he performed post-manifesto marriages. He was appointed by the U.S. government as an Indian agent, and was warmly acquainted with Porfirio Diaz, president of Mexico. Involved in politics in St. George, Ivins held aspirations of running as a Democrat for governor of Utah. In 1907, he was ordained an apostle and later advanced to the First Presidency. Tone, as he called himself, was an accomplished horseman who worked with, and invested in, livestock. He was a game-hunting cowboy who became a statesman for both his country and his expanding religious community.

Though in his correspondence Ivins expressed paramount concern for members of his family, he rarely mentions them in his journals. Rather, his diaries chronicle his business and religious observations including meetings with the Quorum of the Twelve and others. He records meetings of the apostles where decisions were made to remove Church leaders from office who had entered into polygamy after 1904, and details the Church’s dealings with the Mexican government to safeguard the Mormon colonists. There are also discussions where doctrinal principles were clarified. For example, in 1912, Ivins reported that President Joseph F. Smith addressed Brigham Young’s Adam God teachings and affirmed that it was “not a doctrine of the Church.” Ivins clearly loved the ruggedness of outdoor life, as evidenced in his passion for hunting, but was also intrigued with the curiosities at the Utah State Fair, the entertaining showmanship of Buffalo Bill, and the refinement of the theater. Tragedy became commonplace as he recorded vigilante-like justice against Indians and Mexicans who were killed for stealing food, and witnessing the execution of John D. Lee, a once favored son of Mormonism. Appendices of Cowboy Apostle include Ivins Record Book of Marriage and an essay by Ivins son, H. Grant Ivins titled “Polygamy in Mexico as Practiced by the Mormon Church, 1895-1905.”