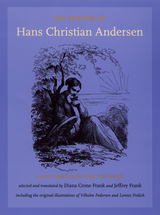 The Stories of Hans Christian Andersen
A New Translation from the Danish
Hans Christian Andersen
Duke University Press, 2005
On the bicentennial of Hans Christian Andersen’s birth, this collection takes Andersen out of the nursery and places him squarely in the literary pantheon. While Andersen’s tales continue to seize the imagination with their singular blend of simplicity, eccentricity, and charm, English-language readers have until now had to content themselves with inaccurate retellings and inadequate translations. Diana Crone Frank, a Danish novelist and linguist, and Jeffrey Frank, a novelist and editor at the New Yorker, offer a much-needed modern translation.

In this collection are twenty-two tales that best represent Andersen’s literary legacy, including such classics as “The Little Mermaid,” “The Ugly Duckling,” “Thumbelisa,” and “The Emperor’s New Clothes,” as well as largely unfamiliar stories like “By the Outermost Sea.” Illuminating notes clarify references in the tales. And in an introductory essay, the Franks explore the writer and his times, placing the enigmatic and often bizarre figure of Andersen among his literary contemporaries, such as Charles Dickens and Søren Kierkegaard, with whom he crossed paths; and they bring to life Andersen’s fascinating relationship with the United States. Illustrated with the delicate and beautiful drawings that accompanied the original Danish publication, The Stories of Hans Christian Andersen will delight readers of all ages.