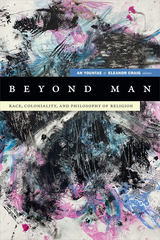 Beyond Man
Race, Coloniality, and Philosophy of Religion
Yountae An and Eleanor Craig, editors
Duke University Press, 2021
Beyond Man reimagines the meaning and potential of a philosophy of religion that better attends to the inextricable links among religion, racism, and colonialism. An Yountae, Eleanor Craig, and the contributors reckon with the colonial and racial implications of the field's history by staging a conversation with Black, Indigenous, and decolonial studies. In their introduction, An and Craig point out that European-descended Christianity has historically defined itself by its relation to the other while paradoxically claiming to represent and speak to humanity in its totality. The topics include secularism, the Eucharist's relation to Blackness, and sixteenth-century Brazilian cannibalism rituals as well as an analysis of how Mircea Eliade's conception of the sacred underwrites settler colonial projects and imaginaries. Throughout, the contributors also highlight the theorizing of Afro-Caribbean thinkers such as Sylvia Wynter, C. L. R. James, Frantz Fanon, and Aimé Césaire whose work disrupts the normative Western categories of religion and philosophy.