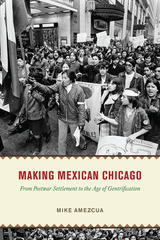 Making Mexican Chicago
From Postwar Settlement to the Age of Gentrification
Mike Amezcua
University of Chicago Press, 2022
An exploration of how the Windy City became a postwar Latinx metropolis in the face of white resistance.

Though Chicago is often popularly defined by its Polish, Black, and Irish populations, Cook County is home to the third-largest Mexican-American population in the United States. The story of Mexican immigration and integration into the city is one of complex political struggles, deeply entwined with issues of housing and neighborhood control. In Making Mexican Chicago, Mike Amezcua explores how the Windy City became a Latinx metropolis in the second half of the twentieth century.

In the decades after World War II, working-class Chicago neighborhoods like Pilsen and Little Village became sites of upheaval and renewal as Mexican Americans attempted to build new communities in the face of white resistance that cast them as perpetual aliens. Amezcua charts the diverse strategies used by Mexican Chicagoans to fight the forces of segregation, economic predation, and gentrification, focusing on how unlikely combinations of social conservatism and real estate market savvy paved new paths for Latinx assimilation. Making Mexican Chicago offers a powerful multiracial history of Chicago that sheds new light on the origins and endurance of urban inequality.