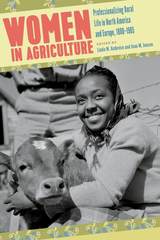 Women in Agriculture
Professionalizing Rural Life in North America and Europe, 1880-1965
Linda M. Ambrose and Joan M. Jensen
University of Iowa Press, 2017
Women have always been skilled at feeding their families, and historians have often studied the work of rural women on farms and in their homes. However, the stories of women who worked as agricultural researchers, producers, marketers, educators, and community organizers have not been told until now. Taking readers into the rural hinterlands of the rapidly urbanizing societies of the United States, Canada, Great Britain, and the Netherlands, the essays in Women in Agriculture tell the stories of a cadre of professional women who acted to bridge the growing rift between those who grew food and those who only consumed it.

The contributors to Women in Agriculture examine how rural women’s expertise was disseminated and how it was received. Through these essays, readers meet subversively lunching ladies in Ontario and African American home demonstration agents in Arkansas. The rural sociologist Emily Hoag made a place for women at the US Department of Agriculture as well as in agricultural research. Canadian rural reformer Madge Watt, British radio broadcaster Mabel Webb, and US ethnobotanists Mary Warren English and Frances Densmore developed new ways to share and preserve rural women’s knowledge. These and the other women profiled here updated and expanded rural women’s roles in shaping their communities and the broader society. Their stories broaden and complicate the history of agriculture in North America and Western Europe.