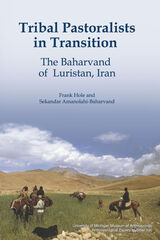 Tribal Pastoralists in Transition
The Baharvand of Luristan, Iran
Frank Hole and Sekandar Amanolahi-Baharvand
University of Michigan Press, 2021
In the spring of 1973, the Baharvand tribe from the Luristan province of central western Iran prepared to migrate from their winter pastures to their summer camp in the mountains. Seasonal migration in spring and fall had been their way of life for as long as anyone in the camp could remember. They moved their camp and their animals—sheep, goats, horses, donkeys, and chickens—in order to find green pastures and suitable temperatures. That year, one migrating family in the tribe allowed an outsider to make the trip with them. Anthropology professor Frank Hole, accompanied by his graduate student, Sekandar Amanolahi-Baharvand, traveled with the family of Morad Khan as they migrated into the mountains. In this volume, Hole describes the journey, the modern and prehistoric sites along the way, and the people he traveled with. It is a portrait of people in transition—even as the family follows the ancient migration path, there are signs of economic and social change everywhere. Illustrated.

Supplementary videos (on the migration, weaving, harvesting, and the bazaars) can be found on Fulcrum (fulcrum.org/UMMAA).
[more]