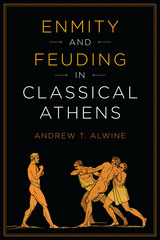 Enmity and Feuding in Classical Athens
By Andrew Alwine
University of Texas Press, 2015

Much has been written about the world’s first democracy, but no book so far has been dedicated solely to the study of enmity in ancient Athens. Enmity and Feuding in Classical Athens is a long-overdue analysis of the competitive power dynamics of Athenian honor and the potential problems these feuds created for democracies.

The citizens of Athens believed that harming one’s enemy was an acceptable practice and even the duty of every honorable citizen. They sought public wins over their rivals, making enmity a critical element in struggles for honor and standing, while simultaneously recognizing the threat that personal enmity posed to the community. Andrew Alwine works to understand how Athenians addressed this threat by looking at the extant work of Attic orators. Their speeches served as the intersection between private vengeance and public sanction of illegal behavior, allowing citizens to engage in feuds within established parameters. This mediation helped support Athenian democracy and provided the social underpinning to allow it to function in conjunction with Greek notions of personal honor.

Alwine provides a framework for understanding key issues in the history of democracy, such as the relationship between private and public realms, the development of equality and the rule of law, and the establishment of individual political rights. Serving also as a nuanced introduction to the works of the Attic orators, Enmity and Feuding in Classical Athens is an indispensable addition to scholarship on Athens.