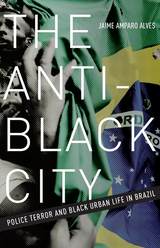 The Anti-Black City provocatively offers race as a vital new lens through which to view violence and marginalization in the supposedly “raceless” São Paulo. Ironically, in a context in which racial ambiguity makes it difficult to identify who is black and who is white, racialized access to opportunities and violent police tactics establish hard racial boundaries through subjugation and death. Drawing on two years of ethnographic research in prisons and neighborhoods on the periphery of this mega-city, Alves documents the brutality of police tactics and the complexity of responses deployed by black residents, including self-help initiatives, public campaigns against police violence, ruthless gangs, and self-policing of communities.

The Anti-Black City reveals the violent and racist ideologies that underlie state fantasies of order and urban peace in modern Brazil. Illustrating how “governing through death” has become the dominant means for managing and controlling ethnic populations in the neoliberal state, Alves shows that these tactics only lead to more marginalization, criminality, and violence. Ultimately, Alves’s work points to a need for a new approach to an intractable problem: how to govern populations and territories historically seen as “ungovernable.”