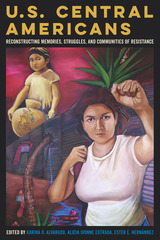 While much has been written about U.S. and Central American military, economic, and political relations, this is the first book to articulate the rich and dynamic cultures, stories, and historical memories of Central American communities in the United States. Contributors to this anthology—often writing from their own experiences as members of this community—articulate U.S. Central Americans’ unique identities as they also explore the contradictions found within this multivocal group.

Working from within Guatemalan, Salvadoran, and Maya communities, contributors to this critical study engage histories and transnational memories of Central Americans in public and intimate spaces through ethnographic, in-depth, semistructured, qualitative interviews, as well as literary and cultural analysis. The volume’s generational, spatial, urban, indigenous, women’s, migrant, and public and cultural memory foci contribute to the development of U.S. Central American thought, theory, and methods. Woven throughout the analysis, migrants’ own oral histories offer witness to the struggles of displacement, travel, navigation, and settlement of new terrain. This timely work addresses demographic changes both at universities and in cities throughout the United States.

U.S. Central Americans draws connections to fields of study such as history, political science, anthropology, ethnic studies, sociology, cultural studies, and literature, as well as diaspora and border studies. The volume is also accessible in size, scope, and language to educators and community and service workers wanting to know about their U.S. Central American families, neighbors, friends, students, employees, and clients.