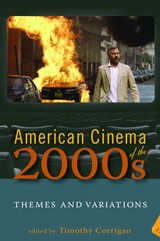 The decade from 2000 to 2009 is framed, at one end, by the traumatic catastrophe of the 9/11 attacks on the World Trade Center and, at the other, by the election of the first African American president of the United States. In between, the United States and the world witnessed the rapid expansion of new media and the Internet, such natural disasters as Hurricane Katrina, political uprisings around the world, and a massive meltdown of world economies.

Amid these crises and revolutions, American films responded in multiple ways, sometimes directly reflecting these turbulent times, and sometimes indirectly couching history in traditional genres and stories. In American Cinema of the 2000s, essays from ten top film scholars examine such popular series as the groundbreaking Matrix films and the gripping adventures of former CIA covert operative Jason Bourne; new, offbeat films like Juno; and the resurgence of documentaries like Michael Moore’s Fahrenheit 9/11.  Each essay demonstrates the complex ways in which American culture and American cinema are bound together in subtle and challenging ways. 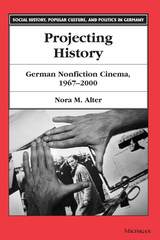 Projecting History
German Nonfiction Cinema, 1967-2000
Nora M. Alter
University of Michigan Press, 2002
The intersection between social, historical, and political developments in Germany and the emergence of a nonfiction mode of film production
[more]