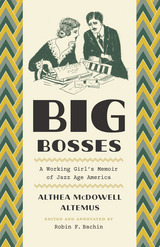 Big Bosses
A Working Girl’s Memoir of Jazz Age America
Althea McDowell Altemus
University of Chicago Press, 2016
Sharp, resourceful, and with a style all her own, Althea Altemus embodied the spirit of the independent working woman of the Jazz Age. In her memoir, Big Bosses, she vividly recounts her life as a secretary for prominent (but thinly disguised) employers in Chicago, Miami, and New York during the late teens and 1920s. Alongside her we rub elbows with movie stars, artists, and high-profile businessmen, and experience lavish estate parties that routinely defied the laws of Prohibition.

Beginning with her employment as a private secretary to James Deering of International Harvester, whom she describes as “probably the world’s oldest and wealthiest bachelor playboy,” Altemus tells us much about high society during the time, taking us inside Deering’s glamorous Miami estate, Vizcaya, an Italianate mansion worthy of Gatsby himself. Later, we meet her other notable employers, including Samuel Insull, president of Chicago Edison; New York banker S. W. Straus; and real estate developer Fred F. French. We cinch up our trenchcoats and head out sleuthing in Chicago, hired by the wife of a big boss to find out how he spends his evenings (with, it turns out, a mistress hidden in an apartment within his office, no less). Altemus was also a struggling single mother, a fact she had to keep secret from her employers, and she reveals the difficulties of being a working woman at the time through glimpses into women’s apartments, their friendships, and the dangers—sexual and otherwise—that she and others faced. Throughout, Altemus entertains with a tart and self-aware voice that combines the knowledge of an insider with the wit and clarity of someone on the fringe.

Anchored by extensive annotation and an afterword from historian Robin F. Bachin, which contextualizes Altemus’s narrative, Big Bosses provides a one-of-a-kind peek inside the excitement, extravagances, and the challenges of being a working woman roaring through the ’20s.
[more]