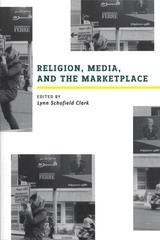 Religion is infiltrating the arena of consumer culture in increasingly visible ways. We see it in a myriad of forms-in movies, such as Mel Gibson's The Passion of the Christ, on Internet shrines and kitschy Web "altars," and in the recent advertising campaign that attacked fuel-guzzling SUVs by posing the question: What would Jesus drive?

In Religion, Media, and the Marketplace, scholars in history, media studies, and sociology explore this intersection of the secular and the sacred. Topics include how religious leaders negotiate between the competing aims of the mainstream and the devout in the commercial marketplace, how politics and religious beliefs combine to shape public policy initiatives, how the religious "other" is represented in the media, and how consumer products help define the practice of different faiths.

At a time when religious fundamentalism in the United States and throughout the world is inseparable from political aims, this interdisciplinary look at the mutual influences between religion and the media is essential reading for scholars from a wide variety of disciplines.