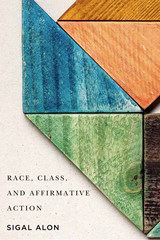 Alon finds that affirmative action at elite institutions in both countries is a key vehicle of mobility for disenfranchised students, whether they are racial and ethnic minorities or socioeconomically disadvantaged. Affirmative action improves their academic success and graduation rates and leads to better labor market outcomes. The beneficiaries of affirmative action in both countries thrive at elite colleges and in selective fields of study. As Alon demonstrates, they would not be better off attending less selective colleges instead.

Alon finds that Israel’s class-based affirmative action programs have provided much-needed entry slots at the elite universities to students from the geographic periphery, from high-poverty high schools, and from poor families. However, this approach has not generated as much ethnic diversity as a race-based policy would. By contrast, affirmative action policies in the United States have fostered racial and ethnic diversity at a level that cannot be matched with class-based policies. Yet, class-based policies would do a better job at boosting the socioeconomic diversity at these bastions of privilege. The findings from both countries suggest that neither race-based nor class-based models by themselves can generate broad diversity. According to Alon, the best route for promoting both racial and socioeconomic diversity is to embed the consideration of race within class-based affirmative action. Such a hybrid model would maximize the mobility benefits for both socioeconomically disadvantaged and minority students.

Race, Class, and Affirmative Action moves past political talking points to offer an innovative, evidence-based perspective on the merits and feasibility of different designs of affirmative action.
[more]