2 books by Allworth, Edward A. 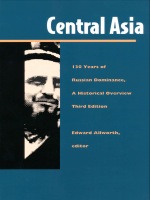 Central Asia
One Hundred Thirty Years of Russian Dominance, A Historical Overview
Edward A. Allworth, ed.
Duke University Press, 1994
For centuries, Central Asia has been a leading civilization, an Islamic heartland, and a geographical link between West and East. After a long traditional history, it is now in a state of change. With the breakup of the Soviet Union in 1991, five newborn Central Asian states have emerged in place of the former Soviet Central Asia and Afghanistan. Central Asia provides the most comprehensive survey of the history of the impact of Russian rule upon the political, economic, social, intellectual, and cultural life of this diverse region. Together, these essays convey a sense of the region’s community as well as the divisive policies that have affected it for so long.
Now in its third edition (it was first published in 1967 and revised in 1989), this new edition of Central Asia has been updated to include a new preface, a revised and updated bibliography, and a final chapter that brings the book up to 1994 in considering the crucial problems that stem from a deprivation of sovereign, indigenous leadership over the past 130 years. This volume provides a broad and essential background for understanding what has led up to the late twentieth-century configuration of Central Asia.
[more] 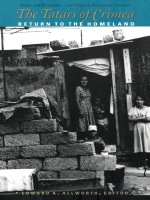 The Tatars of Crimea
Return to the Homeland
Edward A. Allworth, ed.
Duke University Press, 1998
This new edition of Edward A. Allworth’s The Tatars of Crimea has been extensively updated. Five new chapters examine the situation of Crimean Tatars since the breakup of the USSR in 1991 and detail the continuing struggle of the Tatars to find peace and acceptance in a homeland.
Contributors to this volume—almost half of whom are Tatars—discuss the problematic results of the partial Tatar return to Crimea that began in the 1980s. This incomplete migration has left the group geographically split and has complicated their desire for stability as a people, whether in their own homeland or in the Central Asian diaspora. Those who have returned to the region on the Black Sea in Ukrayina (formerly Ukraine) have found themselves engulfed in a hostile political environment dominated by Russian residents attempting to stifle the resurgence of Crimean Tatar life. Specific essays address the current political situation in and around Crimea, recent elections, and promising developments in the culture, leadership, and movement toward unity among Crimean Tatars.
Beyond demonstrating the problems of one nationality caught in a fierce power struggle, The Tatars of Crimea offers an example of the challenges faced by all nationalities of the former Soviet Union who now contend with deteriorating economic and political conditions, flagrant discrimination against ethnic minorities, and the denial of civil and human rights common in many of the newly independent states.