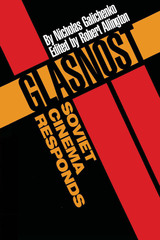 With the coming of glasnost to the Soviet Union, filmmakers began to explore previously forbidden themes, and distributors released films that were suppressed by pre-glasnost-era censors. Soviet cinema underwent a revolution, one that mirrors and helps interpret the social revolution that took place throughout the USSR. Glasnost—Soviet Cinema Responds is the first overall survey of the effects of this revolution on the work of Soviet filmmakers and their films.

The book is structured as a series of three essays and a filmography of the directors of glasnost cinema. The first essay, "The Age of Perestroika," describes the changes that occurred in Soviet cinema as it freed itself from the legacy of Stalinism and socialist realism. It also considers the influence of film educator and director Mikhail Romm. "Youth in Turmoil" takes a sociological look at films about youth, the most dynamic and socially revealing of glasnost-era productions. "Odysseys in Inner Space" charts a new direction in Soviet cinema as it focuses on the inner world of individuals.

The filmography includes thirty-three of the most significant glasnost-era directors, including Tengiz Abuladze, Karen Shakhnazarov, and Sergei Soloviev, with a comprehensive list of their films. Discussions of many individual films, such as Repentance, The Messenger Boy, and The Wild Pigeon, and interviews with the directors reveal the effects that glasnost and perestroika have had on the directors' lives and art.