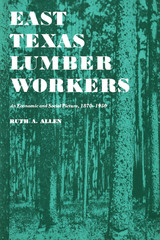 In 1950 a million Texans—more than a tenth of the entire population of the state—lived in a region where one family in every two earned less than $2,000 a year. Composing that region are the thirty-two counties of northeastern Texas in which the lumber industry is concentrated. In eleven of these counties, 70 percent of family incomes were less than $2,000.

Until 1930 the Texas lumber industry furnished employment for more workers than any other manufacturing in the state. Though displaced in that year by oil refining, it still ranks near the top in the number of workers it hires. The aim of this study is to show how these people whose economic life has been dominated by a single industry have fared for eighty years in comparison with their fellow Texans and with lumber workers in the Pacific Northwest and the Lakes states.

Texas lumber workers have always been in many ways a peculiar people, conditioned by their historical roots, by isolation from the mainstream of national life, and by the deeply rural nature of their environment. A typical group portrait would show two of each three persons to be adult white males. One of three would be African American. It would not show any women. Here and there a face would bear the marks of alien birth. Most of the figures, however, would be natives not only of America but of East Texas.

In family background, in work experience, and in social and economic environment these people have been uniquely homogeneous. In the early 1950s the Congressional Committee on the Economic Report of the President designated the area as one of “deep poverty” and pinpointed it as one which had failed notably to reach the level of living achieved by the state and the nation. Its economic status has been lower than that of any other group in Texas except household servants, and its education level has been well below that of the state and nation and increasingly below the level of acceptance in any jobs other than those requiring a minimum of training and competence. The immediate past has shown not only no improvement but a positive deterioration.

Drawing upon personal investigation and state and federal reports, the author has put the contemporary situation in a historical setting. Her delineation is principally in terms of figures that weave a social fabric from which definite patterns emerge—insecure wages, illiteracy and inefficient production, unsuccessful attempts to achieve effective organization. Though the book is directed primarily toward those who should feel concern at its revelations, it also suggests a wealth of untapped sources for the ethnographer and the folklorist.