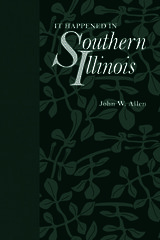 In this collection of articles describing the people, places, and folkways of southern Illinois, John W. Allen provides entertaining and informative glimpses into the region’s past. Included here are sketches of the early pioneering days when wolves were literally chased from the door, stories about the many Indian artifacts discovered among the rolling hills and valleys of the area, and articles pertaining to the strategic role the region played during the Civil War. Allen also describes the activities of such infamous outlaws as Samuel Mason and the Harpe brothers as well as the famous Illinois-born heroes “Bat” Masterson, “Wild Bill” Hickok, and Wyatt Earp.

In his warm and friendly style, Allen reminisces about the self-sufficient and satisfying rural life of a previous generation with its oxcarts, pie suppers, threshing machines, kerosene lamps, and blacksmith shops. Any reader interested in southern Illinois and its history will delight in this collection of stories from John W. Allen’s popular newspaper column, “It Happened in Southern Illinois.” 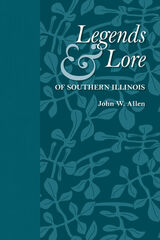 In the 1950s and ‘60s, John W. Allen told the people of southern Illinois about themselves—about their region, its history, and its folkways—in his series of newspaper articles, “It Happened in Southern Illinois.” Each installment of the series depicted a single item of interest—a town, a building, an enterprise, a person, an event, a custom. Originally published in 1963, Legends & Lore of Southern Illinois brings together a selection of these articles preserving a valuable body of significant local history and cultural lore.

During territorial times and early statehood, southern Illinois was the most populous and most influential part of the state. But the advent of the steamboat and the building of the National Road made the lands to the west and north more easily accessible, and the later settlers struck out for the more expansive and fertile prairies. The effect of this movement was to isolate that section of the state known as Egypt and halt its development, creating what Allen termed “an historical eddy.” Bypassed as it was by the main current of westward expansion and economic growth, its culture changed very slowly. Methods, practices, and the tools of the pioneer continued in use for a long time. The improved highways and better means of communication of the twentieth century brought a marked change upon the region, and daily life no longer differed materially from that of other areas.

Against such a cultural and historical backdrop, Mr. Allen wrote these sketches of the people of southern Illinois—of their folkways and beliefs, their endeavors, successes, failures, and tragedies, and of the land to which they came. There are stories here of slaves and their masters, criminals, wandering peddlers, politicians, law courts and vigilantes, and of boat races on the rivers. Allen also looks at the region’s earlier history, describing American Indian ruins, monuments, and artifacts as well as the native population’s encounters with European settlers.

Many of the vestiges of the region’s past culture have all but disappeared, surviving only in museums and in the written record. This new paperback edition of Legends & Lore of Southern Illinois brings that past culture to life again in Allen’s descriptive, engaging style.