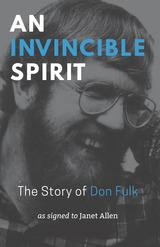 An Invincible Spirit
The Story of Don Fulk
Don Fulk, as signed to Janet Allen
Gallaudet University Press, 2019
“Don taught us how to be a real independent living center. Nothing was easy; every issue that came up on the road to Don’s independence was a challenge and a struggle, but the experience pushed us and we learned from it. We were not going to let Don down; all of us were committed to Don’s freedom and independence.”
—Kathleen Kleinman, Executive Director, TRPIL (Transitional Paths to Independent Living)

Profoundly deafened as an infant, Don Fulk didn’t learn his name or go to school until the age of ten. When he was eighteen years old and a budding superstar on his football and basketball teams, he broke his neck in a swimming accident, and became paralyzed. After his injury, he was confined to a bed in his parents’ home for eight years, unable to move and barely able to communicate. After his family could no longer care for him, he spent nine years in a nursing home where he suffered from abuse and neglect.

Yet through a life marred by isolation and frustration, Fulk endured with strength, humor, and grace. He never gave up pursuing his dreams for independence and self-worth, and improving the lives of others. He fought a system that was unfair and discriminatory, and helped pave the way for people with disabilities to live independently. Don Fulk signed his story to author Janet Allen, describing his difficult home life, the incredible friends who changed his life, and his dramatic escape from an abusive nursing home. An Invincible Spirit is a story of hope, empowerment, and the battles people with disabilities have fought—and continue to fight—to improve the quality of their lives.
[more]