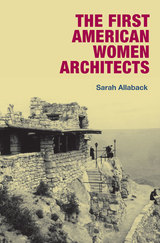 The First American Women Architects
Sarah Allaback
University of Illinois Press, 2007
By 1920, there were over two hundred women practicing architecture in the United States, actively working on major design and building projects before they were even given the right to vote. These women designed thousands of buildings nationwide: apartments in Kansas City, hotels in the nation's national parks, churches in Michigan, and mansions on the coast of California, to name a few. In The First American Women Architects, Sarah Allaback chronicles the lives and careers of more than seventy pioneering female architects practicing in the United States in the late nineteenth and early twentieth centuries, nearly all of whom have been forgotten--until now.

Organized alphabetically as a reference guide, this volume provides a biographical sketch of each architect's life, education, and professional career, and a list of known works and sources for further research. Many of these remarkable women have never before appeared in any other history, making The First American Women Architects a unique and invaluable reference for students and scholars interested in women's history and architecture. As an instructive record of the legacy of women in architectural history, this book will also serve as a stimulating indicator of the broadening potential for women and other minorities within the field of architecture.