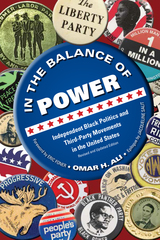 Reveals the multiple independent political tactics and strategies that African Americans have used to expand democracy and uphold civil and political rights since the founding of the nation.

This new edition of Ali’s groundbreaking narrative includes an epilogue by independent political analyst and leader Jacqueline Salit. New material addresses the historic presidencies of both Barack Obama and Donald Trump, as well as the rising tide of independent and anti-party sentiments.

Historically, most black voters in the United States have aligned themselves with one of the two major parties: the Republican Party from the time of the Civil War to the New Deal and, since the New Deal—and especially since the height of the modern civil rights movement—the Democratic Party. However, as In the Balance of Power convincingly demonstrates, African Americans have long been part of independent political movements and have used third parties to advance some of the most important changes in the United States, notably the abolition of slavery, the extension of voting rights, and the enforcement of civil rights.

Since the early nineteenth century, there has been an undercurrent of political independence among African Americans. They helped develop the Liberty Party in the 1840s and have continued to work with third parties to challenge the policies of the two major parties. But despite the legal gains of the modern civil rights movement, elements of Jim Crow remain deeply embedded in our electoral process.

In the Balance of Power presents a history and analysis of African American third-party movements that can help us better understand the growing diversity among black voters today.