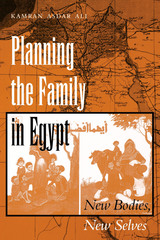 Planning the Family in Egypt
New Bodies, New Selves
By Kamran Asdar Ali
University of Texas Press, 2002
In this ethnographic study, the author examines the policies and practices of family planning programs in Egypt to see how an elitist, Western-informed state attempts to create obliging citizens. The state sees voluntary compliance with the law for the common good as the cornerstone of modernity. Family planning programs are a training ground for the construction of self-disciplined individuals, and thus a rewarding area of study for the fate of social programs in developing countries. Through a careful examination of state-endorsed family planning practices in urban and rural contexts, the author shows us the pervasive, high-pressure persuasion of women, who are encouraged to think as individual decision makers of their immediate families and their national interests. But what of the other forces at work in these women’s lives, binding them to their extended families and to their religious identities? And what of the laws that allow for polygamy and discriminate against women in marriage, inheritance, and as part of the workforce? These forces operate against the received wisdom of the state. Is the Muslim community thought to end at the borders of Egypt? What about local constructions of masculinity when the state appeals to wives to decide for themselves? How does widespread labor migration to foreign countries affect attitudes toward family planning? How is female contraception viewed by the Islamic Brotherhood and other modern Muslim groups? This book questions much that we have taken for granted and gives us grounds for reexamining our assumptions about family planning and the individual and state in developing countries such as Egypt.
[more] 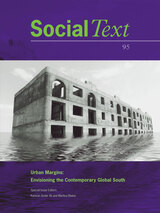 Urban Margins
Envisioning the Contemporary Global South, Volume 26
Kamran Asdar Ali and Martina Rieker, eds.
Duke University Press
Urban studies of the global South have paid particular attention to megacities, such as Mumbai or Johannesburg, while more peripheral urban landscapes—including small and medium-sized towns as well as the margins of megacities themselves—remain overlooked. Emerging from the work of the Shehr Comparative Urban Landscapes Network, an academic initiative that seeks to further a social-historical and critical understanding of contemporary cities and urban practices, this special issue of Social Text takes up the question of marginality in contemporary urban cartographies in the Middle East, South Asia, and Africa.

“Urban Margins” explores the complex processes through which citizens produce and negotiate these marginalized landscapes and in turn are informed by them. Focusing on Douala in Cameroon and Dakar in Senegal, one essay discusses how the state’s failure to provide for its citizens has led many to turn to informal networks and affiliations—whether kin-based, local, translocal, gendered, religious, or secular—for survival. Rendering the urban landscape of these cities in terms of these networks and the ways that they shape a citizen’s interaction with the city, the essay considers the political possibilities for African cities where diverse multilingual and ethnic populations face the challenges, pitfalls, and compromises of coexistence. Examining how female migrant workers negotiate various spaces within the urban landscape of the free trade zone outside of Colombo, Sri Lanka, another essay details how the city represents a site of personal autonomy and political possibilities for both women and men. One contributor addresses the city of Ramallah in the embattled West Bank—the de facto Palestinian capital and the only cosmopolitan space within the occupied territories—to consider how the Palestinian urban middle class remains haunted by the “unmodern” within its own history and present. Another surveys changes in the cultural significance of roads, forts, and town walls in Bahla, Oman, in the aftermath of the country’s 1970 coup d’etat.