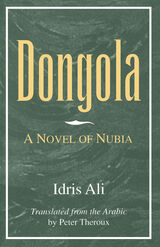 The University of Arkansas Press Award for Arabic Literature in Translation, 1997

In this, the first Nubian novel ever translated, Awad Shalali, a Nubian worker in modern Egypt, dreams of Dongola—the capital of medieval Nubia, now lost to the flood waters of the Aswan High Dam. In Dongola, the Nubians reached their zenith. They defeated and dominated Upper Egypt, and their archers, deadly accurate in battle, were renowned as “the bowman of the glance.

Helima, Awad’s wife, must deal with the reality of today’s Nubia, a poverty-stricken bottomland. Men like Awad now work in Cairo for good wages while the women remain at home in squalor, dominated by the Islam of their conquerors and ignorant of the glory now covered by the Nile’s water. Left to tend Awad’s sick mother and his dying country, Halima grows despondent and learns the truths behind the Upper Egyptian lyric: “Time, you are a traitor—what have you done with my love?

Through his characters’ pain and suffering, Idris Ali paints in vibrant detail, with wit and a keen sense of history’s absurdities, the story of cultures and hearts divided, of lost lands, impossible dreams, and abandoned lives.