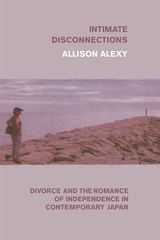 Intimate Disconnections
Divorce and the Romance of Independence in Contemporary Japan
Allison Alexy
University of Chicago Press, 2020
In many ways, divorce is a quintessentially personal decision—the choice to leave a marriage that causes harm or feels unfulfilling to the two people involved. But anyone who has gone through a divorce knows the additional public dimensions of breaking up, from intense shame and societal criticism to friends’ and relatives’ unsolicited advice. In Intimate Disconnections, Allison Alexy tells the fascinating story of the changing norms surrounding divorce in Japan in the early 2000s, when sudden demographic and social changes made it a newly visible and viable option. Not only will one of three Japanese marriages today end in divorce, but divorces are suddenly much more likely to be initiated by women who cite new standards for intimacy as their motivation. As people across Japan now consider divorcing their spouses, or work to avoid separation, they face complicated questions about the risks and possibilities marriage brings: How can couples be intimate without becoming suffocatingly close? How should they build loving relationships when older models are no longer feasible? What do you do, both legally and socially, when you just can’t take it anymore?

Relating the intensely personal stories from people experiencing different stages of divorce, Alexy provides a rich ethnography of Japan while also speaking more broadly to contemporary visions of love and marriage during an era in which neoliberal values are prompting wide-ranging transformations in homes across the globe.
[more]