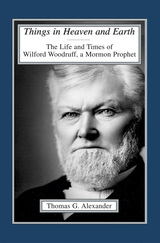 Things in Heaven and Earth
The Life and Times of Wilford Woodruff
Thomas G. Alexander
Signature Books, 1993
Wilford Woodruff converted to the LDS church in 1833, he joined a millenarian group of a few thousand persecuted believers clustered around Kirtland, Ohio. When he died sixty-five years later in 1898, he was the leader of more than a quarter of a million followers worldwide who were on the verge of entering the mainstream of American culture.

Before attaining that status of senior church apostle at the death of John Taylor in 1886, Woodruff had been one of the fiercest opponents of United States hegemony. He spent years evading territorial marshals on the Mormon “underground,” escaping prosecution for polygamy, unable even to attend his first wife’s funeral. As church president, faced with disfranchisement and federal confiscation of Mormon property, including temples, Woodruff reached his monumental decision in 1890 to accept U.S. law and to petition for Utah statehood.

As church doctrines and practices evolved, Woodruff himself changed. The author examines the secular and religious development of Woodruff’s world view from apocalyptic mystic to pragmatic conciliator. He also reveals the gentle, solitary farmer; the fisherman and horticulturalist; the family man with seven wives; the charismatic preacher of the Mormon Reformation; the astute businessman; the urbane, savvy politician who courted the favor of prominent Republicans in California and Oregon (Leland Stanford and Isaac Trumbo); and the vulnerable romantic who pursued the affections of Lydia Mountford, an international lecturer and Jewish rights advocate. He traces a faithful polygamist who ultimately embraced the Christian Home movement and settled comfortably into a monogamous relationship in an otherwise typically Victorian setting.