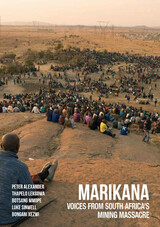 The Marikana Massacre of August 16, 2012, was the single most lethal use of force by South African security forces against civilians since the end of apartheid. Those killed were mineworkers in support of a pay raise. Through a series of interviews conducted with workers who survived the attack, this account documents and examines the controversial shootings in great detail, beginning with a valuable history of the events leading up to the killing of workers, and including eyewitness accounts of the violence and interviews with family members of those who perished.

While the official Farlam Commission investigation of the massacre is still ongoing, many South Africans do not hold much confidence in the government’s ability to examine its own complicity in these events. Marikana, on the other hand, examines the various roles played by the African National Congress, the mine company, and the National Union of Mineworkers in creating the conditions that led to the massacre. While the commission’s investigations take place in a courtroom setting tilted toward those in power, Marikana documents testimony from the mineworkers in the days before official statements were even gathered, offering an unusually immediate and unfiltered look at the reality from the perspective of those most directly affected. Enhanced by vivid maps that make clear the setting and situation of the events, Marikana is an invaluable work of history, journalism, sociology, and activism.