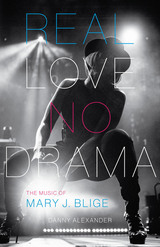 Mary J. Blige is an icon who represents the political consciousness of hip hop and the historical promise of soul. She is an everywoman, celebrated by Oprah Winfrey and beloved by pop music fans of all ages and races. Blige has sold over fifty million albums, won numerous Grammys, and even played at multiple White House events, as well as the 2013 Nobel Peace Prize ceremony. Displaying astonishing range and versatility, she has recorded everything from Broadway standards to Led Zeppelin anthems and worked with some of popular music’s greatest artists—Aretha Franklin, Eric Clapton, Elton John, Whitney Houston, Sting, U2, and Beyoncé, among them.

Real Love, No Drama: The Music of Mary J. Blige tells the story of one of the most important artists in pop music history. Danny Alexander follows the whole arc of Blige’s career, from her first album, which heralded the birth of “hip hop soul,” to her critically praised 2014 album, The London Sessions. He highlights the fact that Blige was part of the historically unprecedented movement of black women onto pop radio and explores how she and other women took control of their careers and used their music to give voice to women’s (and men’s) everyday struggles and dreams. This book adds immensely to the story of both black women artists and artists rooted in hip hop and pays tribute to a musician who, by expanding her reach and asking tough questions about how music can and should evolve, has proven herself an artistic visionary.