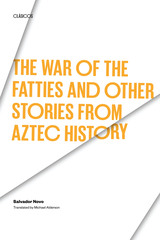 The War of the Fatties and Other Stories from Aztec History
By Salvador Novo
University of Texas Press, 1993
In "The War of the Fatties," a campy, tongue-in-cheek retelling of an episode from the Mexican "Trojan War," naked fat women from Tlatelolco discombobulate Tenochtitlan’s invading army by squirting them with breast milk. Told with satiric allusions to the policies and tactics used by Mexico’s current ruling party, PRI, to consolidate its power, the play unfolds a history of vain rivalry and decadence, intricate political maneuvers, corruption, and unchecked ambition that determined the course of Mexican history for two centuries before the Spanish conquest. Novo’s other works in this collection—"A Few Aspects of Sex among the Nahuas," "Ahuítzotl and the Magic Water," "Cuauhtémoc: Play in One Act," "Cuauhtémoc and Eulalia: A Dialogue," "Malinche and Carlota: A Dialogue," and "In Ticitézcatl or The Enchanted Mirror: Opera in Two Acts"—represent nearly all of his Aztec-related writings. Taken together, they provide a delightful introduction to Novo’s later works and a light-hearted, historically accurate introduction to Aztec culture. The text is supplemented by a glossary of Nahuatl terms, notes on the historical characters, and an introduction that provides historical background and places Novo’s works within their cultural context.
[more]