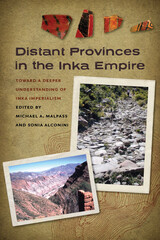 Distant Provinces in the Inka Empire
Toward a Deeper Understanding of Inka Imperialism
Michael A. Malpass
University of Iowa Press, 2010

Who was in charge of the widespread provinces of the great Inka Empire of the fifteenth and sixteenth centuries: Inka from the imperial heartland or local leaders who took on the trappings of their conquerors, either by coercion or acceptance? By focusing on provinces far from the capital of Cuzco, the essays in this multidisciplinary volume provide up-to-date information on the strategies of domination asserted by the Inka across the provinces far from their capital and the equally broad range of responses adopted by their conquered peoples.

Contributors to this cutting-edge volume incorporate the interaction of archaeological and ethnohistorical research with archaeobotany, biometrics, architecture, and mining engineering, among other fields. The geographical scope of the chapters—which cover the Inka provinces in Bolivia, in southeast Argentina, in southern Chile, along the central and north coast of Peru, and in Ecuador—build upon the many different ways in which conqueror and conquered interacted. Competing factors such as the kinds of resources available in the provinces, the degree of cooperation or resistance manifested by local leaders, the existing levels of political organization convenient to the imperial administration, and how recently a region had been conquered provide a wealth of information on regions previously understudied. Using detailed contextual analyses of Inka and elite residences and settlements in the distant provinces, the essayists evaluate the impact of the empire on the leadership strategies of conquered populations, whether they were Inka by privilege, local leaders acculturated to Inka norms, or foreign mid-level administrators from trusted ethnicities.

By exploring the critical interface between local elites and their Inka overlords, Distant Provinces in the Inka Empire builds upon Malpass’s 1993 Provincial Inca: Archaeological and Ethnohistorical Assessment of the Impact of the Inca State to support the conclusions that Inka strategies of control were tailored to the particular situations faced in different regions. By contributing to our understanding of what it means to be marginal in the Inka Empire, this book details how the Inka attended to their political and economic goals in their interactions with their conquered peoples and how their subjects responded, producing a richly textured view of the reality that was the Inka Empire.