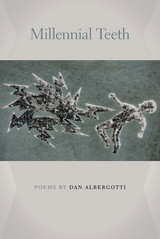 The poetry in Millennial Teeth will feel both refreshingly new and strangely familiar to Albergotti’s audience. Some poems pay direct tribute to such literary luminaries as Wallace Stevens and Philip Larkin, while others give nods to icons of pop culture, from Radiohead to Roman Polanski. The narrator muses on the resurrection of Christina the Astonishing, the works of Coleridge, and the mindless duties of minor players in Shakespeare’s Hamlet.

Yet these familiar faces are not our friends; they are juxtaposed with the heartbreaking apocalypses, both natural and man-made, that have plagued the world since the first plane flew into the World Trade Center. A reluctant witness to such events, the narrator of these poems attempts to navigate his own personal crises, including the mental illness and dementia of loved ones and the inability to connect with others, from the darkness of a personal orbit far from the sun. As he vehemently rejects the notions of religious succor, immortality, and the passive acceptance of fate, he simultaneously yearns to be proven wrong. Yet despite his trials, Albergotti’s narrator maintains a gallows humor and wry insight that balance his despair.

A riveting exploration of the all-too-human struggle between faith and doubt, skepticism and obsession, Millennial Teeth has both heart and bite in plenty.