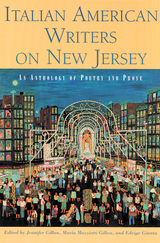 This anthology gathers fiction, poetry, memoirs, oral histories, and journalistic pieces by some of the best writers to chronicle the Italian American experience in the Garden State. These works focus on ethnic identity and the distinctive culture of New Jersey, which has long been home to a large and vital Italian American community.

Filled with passion, humor, and grace, these writings depict a variety of experiences, including poignant but failed attempts at conformity and the alienation often felt by ethnic Americans. The authors also speak of the strength gained through the preservation of their communities and the realization that it is often the appreciation of their heritage that helps them to succeed. Although presented from the vantage point of only one ethnic group, this book addresses in microcosm the complexities of American identity, depicting situations and conveying emotions that will resonate with people of all immigrant ancestries.

Among the many writers featured are Gay Talese, Bill Ervolino, Tom Perrotta, Louise DeSalvo, Carole Mazo, Diane di Prima, and Maria Laurino. Each of the contributors provides a fresh perspective on the diversity, complexity, and richness of the Italian American experience.

Publication of this book is made possible in part by a grant from the Institute of Italian and Italian American Heritage Studies, State of New Jersey.