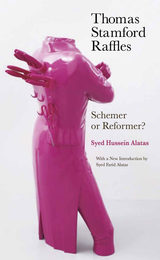 Thomas Stamford Raffles
Schemer or Reformer?
Syed Hussein Alatas
National University of Singapore Press, 2020
More than two hundred years after Thomas Stamford Raffles established a British factory on the island of Singapore, he continues to be a towering figure in the nation. Not one but two statues of Raffles stand prominently in Singapore’s civic and heritage district, streets and squares are named after him, and important local businesses use his name. But does Raffles deserve this recognition? Should he continue to be celebrated—or like Cecil Rhodes in South Africa, must Raffles fall?

This is not a new question—in fact, it was considered at length as far back as 1971, in Syed Hussein Alatas’s slim but devastating volume Thomas Stamford Raffles: Schemer or Reformer?. While the book failed to spark a wide debate on Raffles’s legacy in 1970s Singapore, nearly 50 years after its original publication this powerful work feels wholly fresh and relevant. This edition features a new introduction by Syed Farid Alatas assessing contemporary Singapore’s take on Raffles, and how far we have, or have not, come in thinking through Singapore’s colonial legacy.
[more]