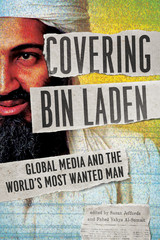 Covering Bin Laden
Global Media and the World's Most Wanted Man
Edited by Susan Jeffords and Fahed Yahya Al-Sumait
University of Illinois Press, 2015
Starting in 2001, much of the world media used the image of Osama bin Laden as a shorthand for terrorism. Bin Laden himself considered media manipulation on a par with military, political, and ideological tools, and intentionally used interviews, taped speeches, and distributed statements to further al-Qaida's ends.

In Covering Bin Laden, editors Susan Jeffords and Fahed Yahya Al-Sumait collect perspectives from global scholars exploring a startling premise: that media depictions of Bin Laden not only diverge but often contradict each other, depending on the media provider and format, the place in which the depiction is presented, and the viewer's political and cultural background. The contributors analyze the representations of the many Bin Ladens, ranging from Al Jazeera broadcasts to video games. They examine the media's dominant role in shaping our understanding of terrorists and why/how they should be feared, and they engage with the ways the mosaic of Bin Laden images and narratives have influenced policies and actions around the world.