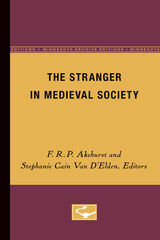 The Stranger in Medieval Society was first published in 1998. Minnesota Archive Editions uses digital technology to make long-unavailable books once again accessible, and are published unaltered from the original University of Minnesota Press editions.

The Stranger in Medieval Society examines the presence of outsiders in medieval Europe. Whether welcome or unwelcome, voluntary or involuntary, strangers appear in every society; they leave their own communities, venture into new environments, confront differences, and often spark changes. The first collection in medieval studies to concentrate on the notion of the stranger, these essays show how outsiders influenced the culture of Europe in the Middle Ages.

Among the topics explored are Edward III and Sir Gawain and the Green Knight as historical and literary instances of chivalric skill and courage; political conflict in the late French epic Renaut de Montauban; and a group of people who were doubly strangers-some thirty thousand Jews, who after being expelled from France in 1306 returned under an experimental agreement a few years later.

This is volume 12 in the Medieval Cultures Series