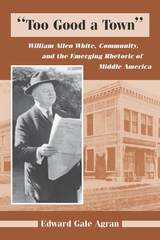 For fifty years, William Allen White, first as a reporter and later as the long-time editor of the Emporia Gazette, wrote of his small town and its Mid-American values. By tailoring his writing to the emerging urban middle class of the early twentieth century, he won his “gospel of Emporia” a nationwide audience and left a lasting impact on he way America defines itself.

Investigating White’s life and his extensive writings, Edward Gale Agran explores the dynamic thought of one of America’s best-read and most-respected social commentators. Agran shows clearly how White honed his style and transformed the myth of conquering the western frontier into what became the twentieth-century ideal of community building.

Once a confidante of and advisor to Theodore Roosevelt, White addressed, and reflected in his work, all the great social and political oscillations of his time—urbanization and industrialism, populism, and progressivism, isolationism internationalism, Prohibition, and New Deal reform. Again and again, he asked the question “What’s the matter?” about his times and townspeople, then found the middle ground. With great care and discernment, Agran gathers the man strains of White’s messages, demonstrating one writer’s pivotal contribution to our idea of what it means to be an American.