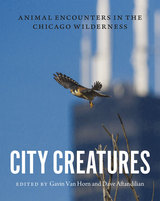 City Creatures
Animal Encounters in the Chicago Wilderness
Edited by Gavin Van Horn and Dave Aftandilian
University of Chicago Press, 2015
Read about Ten Years of City Creatures at the Center for Humans and Nature

We usually think of cities as the domain of humans—but we are just one of thousands of species that call the urban landscape home. Chicago residents knowingly move among familiar creatures like squirrels, pigeons, and dogs, but might be surprised to learn about all the leafhoppers and water bears, black-crowned night herons and bison, beavers and massasauga rattlesnakes that are living alongside them. City Creatures introduces readers to an astonishing diversity of urban wildlife with a unique and accessible mix of essays, poetry, paintings, and photographs.
The contributors bring a story-based approach to this urban safari, taking readers on birding expeditions to the Magic Hedge at Montrose Harbor on the North Side, canoe trips down the South Fork of the Chicago River (better known as Bubbly Creek), and insect-collecting forays or restoration work days in the suburban forest preserves.

The book is organized into six sections, each highlighting one type of place in which people might encounter animals in the city and suburbs. For example, schoolyard chickens and warrior wasps populate “Backyard Diversity,” live giraffes loom at the zoo and taxidermy-in-progress pheasants fascinate museum-goers in “Animals on Display,” and a chorus of deep-freeze frogs awaits in “Water Worlds.” Although the book is rooted in Chicago’s landscape, nature lovers from cities around the globe will find a wealth of urban animal encounters that will open their senses to a new world that has been there all along. Its powerful combination of insightful narratives, numinous poetry, and full-color art throughout will help readers see the city—and the creatures who share it with us—in an entirely new light.
[more]