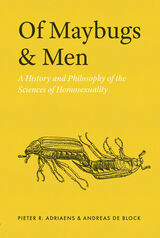 Of Maybugs and Men
A History and Philosophy of the Sciences of Homosexuality
Pieter R. Adriaens and Andreas De Block
University of Chicago Press, 2022
A much-needed exploration of the history and philosophy of scientific research into male homosexuality.

Questions about the naturalness or unnaturalness of homosexuality are as old as the hills, and the answers have often been used to condemn homosexuals, their behaviors, and their relationships. In the past two centuries, a number of sciences have involved themselves in this debate, introducing new vocabularies, theories, arguments, and data, many of which have gradually helped tip the balance toward tolerance and even acceptance. In this book, philosophers Pieter R. Adriaens and Andreas De Block explore the history and philosophy of the gay sciences, revealing how individual and societal values have colored how we think about homosexuality.

The authors unpack the entanglement of facts and values in studies of male homosexuality across the natural and human sciences and consider the extent to which science has mitigated or reinforced homonegative mores. The focus of the book is on homosexuality’s assumed naturalness. Geneticists rephrased naturalness as innateness, claiming that homosexuality is innate—colloquially, that homosexuals are born gay. Zoologists thought it a natural affair, documenting its existence in myriad animal species, from maybugs to men. Evolutionists presented homosexuality as the product of natural selection and speculated about its adaptive value. Finally, psychiatrists, who initially pathologized homosexuality, eventually appealed to its naturalness or innateness to normalize it.

Discussing findings from an array of sciences—comparative zoology, psychiatry, anthropology, evolutionary biology, social psychology, developmental biology, and machine learning—this book is essential reading for anyone interested in what science has to say about homosexuality.
[more]