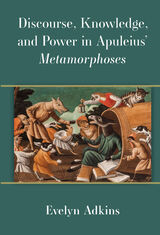 In ancient Rome, where literacy was limited and speech was the main medium used to communicate status and identity face-to-face in daily life, an education in rhetoric was a valuable form of cultural capital and a key signifier of elite male identity. To lose the ability to speak would have caused one to be viewed as no longer elite, no longer a man, and perhaps even no longer human. We see such a fantasy horror story played out in the Metamorphoses  or The Golden Ass, written by Roman North African author, orator, and philosopher Apuleius of Madauros—the only novel in Latin to survive in its entirety from antiquity. In the novel’s first-person narrative as well as its famous inset tales such as the Tale of Cupid and Psyche, the Metamorphoses is invested in questions of power and powerlessness, truth and knowledge, and communication and interpretation within the pluralistic but hierarchical world of the High Roman Empire (ca. 100–200 CE).

Discourse, Knowledge, and Power presents a new approach to the Metamorphoses: it is the first in-depth investigation of the use of speech and discourse as tools of characterization in Apuleius’ novel. It argues that discourse, broadly defined to include speech, silence, written text, and nonverbal communication, is the primary tool for negotiating identity, status, and power in the Metamorphoses. Although it takes as its starting point the role of discourse in the characterization of literary figures, it contends that the process we see in the Metamorphoses reflects the real world of the second century CE Roman Empire. Previous scholarship on Apuleius’ novel has read it as either a literary puzzle or a source-text for social, philosophical, or religious history. In contrast, this book uses a framework of discourse analysis, an umbrella term for various methods of studying the social political functions of discourse, to bring Latin literary studies into dialogue with Roman rhetoric, social and cultural history, religion, and philosophy as well as approaches to language and power from the fields of sociology, linguistics, and linguistic anthropology. Discourse, Knowledge, and Power argues that a fictional account of a man who becomes an animal has much to tell us not only about ancient Roman society and culture, but also about the dynamics of human and gendered communication, the anxieties of the privileged, and their implications for swiftly shifting configurations of status and power whether in the second or twenty-first centuries.