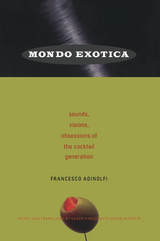 Mondo Exotica
Sounds, Visions, Obsessions of the Cocktail Generation
Francesco Adinolfi Edited and translated by Karen Pinkus with Jason Vivrette
Duke University Press, 2008
Tiki torches, cocktails, la dolce vita, and the music that popularized them—Mondo Exotica offers a behind-the-scenes look at the sounds and obsessions of the Space Age and Cold War period as well as the renewed interest in them evident in contemporary music and design. The music journalist and radio host Francesco Adinolfi provides extraordinary detail about artists, songs, albums, and soundtracks, while also presenting an incisive analysis of the ethnic and cultural stereotypes embodied in exotica and related genres. In this encyclopedic account of films, books, TV programs, mixed drinks, and above all music, he balances a respect for exotica’s artistic innovations with a critical assessment of what its popularity says about postwar society in the United States and Europe, and what its revival implies today.

Adinolfi interviewed a number of exotica greats, and Mondo Exotica incorporates material from his interviews with Martin Denny, Esquivel, the Italian film composers Piero Piccioni and Piero Umiliani, and others. It begins with an extended look at the postwar popularity of exotica in the United States. Adinolfi describes how American bachelors and suburbanites embraced the Polynesian god Tiki as a symbol of escape and sexual liberation; how Les Baxter’s album Ritual of the Savage (1951) ushered in the exotica music craze; and how Martin Denny’s Exotica built on that craze, hitting number one in 1957. Adinolfi chronicles the popularity of performers from Yma Sumac, “the Peruvian Nightingale,” to Esquivel, who was described by Variety as “the Mexican Duke Ellington,” to the chanteuses Eartha Kitt, Julie London, and Ann-Margret. He explores exotica’s many sub-genres, including mood music, crime jazz, and spy music. Turning to Italy, he reconstructs the postwar years of la dolce vita, explaining how budget spy films, spaghetti westerns, soft-core porn movies, and other genres demonstrated an attraction to the foreign. Mondo Exotica includes a discography of albums, compilations, and remixes.