Celebrities and popular icons are increasingly ubiquitous figures of a 21st century postmodern world. Some, in death, blur age-old distinctions of sanctification and trespass on sacred ground long held exclusively by religious saints. An emerging continuum is transforming that sacred arena and raising a number of important issues, including the nature of the relationships between the worshipped and the worshipful and the types of institutions that sustain them.

The Making of Saints: Contesting Sacred Ground investigates a number of religious leaders, healers, folk saints, and popular icons in seeking to identify their commonalities and discover how they speak to the same inner yearnings of human beings for gods and heroes. Issues of social relations, love, emotion, charisma, power, and sanctification are addressed by the contributors. Analyses of hagiographies, biographies, media, control of space, pilgrimage, and acts of devotion provide the bases for the authors' explorations of these issues. Among the sanctified included for analysis are the folk saints El Nino Fidencio and Teresa Urrea; the charismatic rabbis Baba Sali, Baba Baruch, and Ifargan; King Chulalongkorn of Thailand; two political figures, Evita Peron and Che Guevara; and three celebrities: James Dean, Elvis Presley, and Japanese rock star HIDE.

The contributors challenge notions of what is sacred and who may be sanctified, and argue that a broadening of views is needed to accommodate and appreciate emerging contemporary realities. 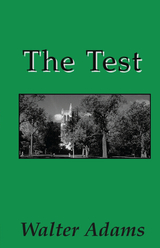 World renowned economist and president of Michigan State University, Walter Adams first published The Test in 1971, a year after his tenure as university president ended. Adams recounts the tumultuous nine months of his office: as the first university president to follow the legendary John Hannah, Adams inherited the unease and resentments that had been quietly swelling under seemingly calm administrative waters.
These resentments, coupled with the increased social awareness generated by sixties activism combined in an explosive protest during the fall of 1969. With gripping honesty and clarity, The Test not only chronicles the events, but offers an indictment of those institutional structures that ignored very real social concerns in favor of esoteric academic pursuits. By examining the perspectives of all the participants, Adams presents new directions for the growth and development of university communities. Both a thoughtful analysis and eyewitness account, The Test presents invaluable documentary evidence of one of the most dynamic periods in American history.