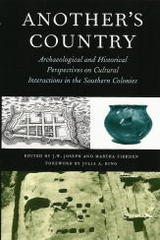 Another's Country
Archaeological and Historical Perspectives on Cultural Interactions in the Southern Colonies
Edited by J.W. Joseph and Martha Zierden
University of Alabama Press, 2001
An engaging look at the rise and fall of cultural diversity in the colonial South and its role in shaping a distinct southern identity

The 18th-century South was a true melting pot, bringing together colonists from England, France, Germany, Ireland, Switzerland, and other locations, in addition to African slaves—all of whom shared in the experiences of adapting to a new environment and interacting with American Indians. The shared process of immigration, adaptation, and creolization resulted in a rich and diverse historic mosaic of cultures.

The cultural encounters of these groups of settlers would ultimately define the meaning of life in the nineteenth-century South. The much-studied plantation society of that era and the Confederacy that sprang from it have become the enduring identities of the South. A full understanding of southern history is not possible, however, without first understanding the intermingling and interactions of the region’s eighteenth-century settlers. In the essays collected here, some of the South’s leading historical archaeologists examine various aspects of the colonial experience, attempting to understand how cultural identity was expressed, why cultural diversity was eventually replaced by a common identity, and how the various cultures intermeshed.

Written in accessible language, this book will be valuable to archaeologists and non-archaeologists alike. Cultural, architectural, and military historians, cultural anthropologists, geographers, genealogists, and others interested in the cultural legacy of the South will find much of value in this book.