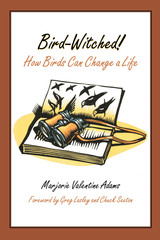 Bird-Witched!
How Birds Can Change a Life
By Marjorie Valentine Adams
University of Texas Press, 2005

Birding can become an addiction. It starts when you hang a bird feeder in the backyard. Then you buy a bird book to identify the birds you see. Then, before you know it, you're keeping a life list and traveling the region, the country, perhaps even the world to catch glimpses of rare birds. Marjorie Adams's birding passion progressed through all these stages and continues today in her tenth decade. In this engaging and informative book, she looks back at her evolution into a full-fledged birder and the concurrent growth of the sport of birding, to which she contributed significantly as a founding member of the American Birding Association, a newspaper columnist on birding, and a teacher and producer of educational wildlife films with her husband and lifelong birding partner, "Red" Adams.

As one who was there from the beginning, Marjorie Adams is uniquely qualified to recount the astonishing rise of birding to a major pastime and recreational industry. She describes the founding of the American Birding Association and profiles its founder, James A. Tucker. She vividly recalls many of her and Red's birding adventures, from southern Canada to Mexico, as well as their encounters with a host of highly regarded birders, including Roger Tory Peterson, Pete Dunne, Victor Emanuel, Charles Hartshorne, and Roy Bedichek. She also explains how her and Red's love for birds led them to become conservation activists and how they produced an award-winning film on the endangered Golden-cheeked Warbler. Offering an important chapter in the story of birding in Texas and the United States, this book establishes Marjorie and Red Adams's rightful place among the leading Texas naturalists of recent decades.