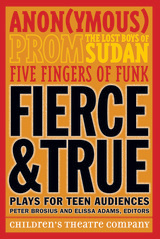 Fierce and True
Plays for Teen Audiences
Children’s Theatre Children’s Theatre Company
University of Minnesota Press, 2010
Established in 1965, the Children's Theatre Company (CTC) of Minneapolis earned its reputation as the flagship theater for young people in this country by staging plays that both entertained and challenged children and their families. Around the age of twelve, however, young people tended to stop coming to CTC, perceiving that they had outgrown what the theater could offer them.
In an effort to reach out to and engage these young people, the CTC began to commission and produce plays aimed at a twelve- to eighteen-year-old audience, focusing on the complexities, idiosyncrasies, and epic dilemmas in the lives of young people. Fierce and True collects four of these critically acclaimed plays: Anon(ymous) by Naomi Iizuka, The Lost Boys of Sudan by Lonnie Carter, Five Fingers of Funk by Will Power, and Prom by Whit MacLaughlin and New Paradise Laboratories.
Professional, full-length works not about teens so much as they are written for them. Ambitious, surprising, and complex, these plays speak directly to teens without pandering to them; they engage, challenge, and respect teenage minds. Diverse and utterly unique, these playwrights are bound together by the excellence of their craft and the power of their storytelling. Fierce and True both redefines the field of theater for young people and provides an invaluable resource for theater professionals, educators, and the teens they serve.
[more]