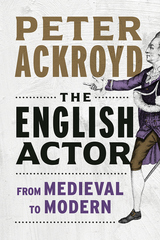 The English Actor
From Medieval to Modern
Peter Ackroyd
Reaktion Books, 2023
From a leading historian and writer, a delightful exploration of the great English tradition of treading the boards.

The English Actor charts the uniquely English approach to stagecraft, from the medieval period to the present day. In thirty chapters, Peter Ackroyd describes, with superb narrative skill, the genesis of acting—deriving from the Church tradition of Mystery Plays—through the flourishing of the craft in the Renaissance, to modern methods following the advent of film and television. Across centuries and media, The English Actor also explores the biographies of the most notable and celebrated British actors. From the first woman actor on the English stage, Margaret Hughes, who played Desdemona in 1660; to luminaries like Laurence Olivier, Peter O’Toole, Maggie Smith, Judi Dench, and Helen Mirren; to contemporary multihyphenates like Gary Oldman, Kenneth Branagh, Sophie Okonedo, and Chiwetel Ejiofor, Ackroyd gives all fans of the theater an original and superbly entertaining appraisal of how actors have acted, how audiences have responded, and what we mean by the magic of the stage.
[more]