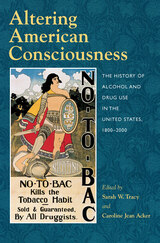 Altering American Consciousness
The History of Alcohol and Drug Use in the United States, 1800-2000
Sarah W. Tracy
University of Massachusetts Press, 2004
Virtually every American alive has at some point consumed at least one, and very likely more, consciousness altering drug. Even those who actively eschew alcohol, tobacco, and coffee cannot easily avoid the full range of psychoactive substances pervading the culture. With many children now taking Ritalin for Attention Deficit Hyperactivity Disorder, professional athletes relying on androstenidione to bulk up, and the chronically depressed resorting to selective serotonin reuptake inhibitors such as Prozac, the early twenty-first century appears no less rife with drugs than previous periods.

Yet, if the use of drugs is a constant in American history, the way they have been perceived has varied extensively. Just as the corrupting cigarettes of the early twentieth century ("coffin nails" to contemporaries) became the glamorous accessory of Hollywood stars and American GIs in the 1940s, only to fall into public disfavor later as an unhealthy and irresponsible habit, the social significance of every drug changes over time.

The essays in this volume explore these changes, showing how the identity of any psychoactive substance—from alcohol and nicotine to cocaine and heroin—owes as much to its users, their patterns of use, and the cultural context in which the drug is taken, as it owes to the drug's documented physiological effects. Rather than seeing licit drugs and illicit drugs, recreational drugs and medicinal drugs, "hard" drugs and "soft" drugs as mutually exclusive categories, the book challenges readers to consider the ways in which drugs have shifted historically from one category to another.