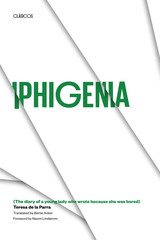 Iphigenia
(The diary of a young lady who wrote because she was bored)
By Teresa de la Parra
University of Texas Press, 1994

"...I didn't want to tell you the truth for anything in the world, because it seemed very humiliating to me..." The truth is that Iphigenia is bored and, more than bored, buried alive in her grandmother's house in Caracas, Venezuela. After the excitement of being a beautiful, unchaperoned young woman in Paris, her father's death has sent her back to a forgotten homeland, where rigid decorum governs. Two men—the married man she adores and the wealthy fiancé she abhors—offer her escape from her prison. Which of these impossible suitors will she choose?

Iphigenia was first published in 1924 in Venezuela, where it hit patriarchal society like a bomb. Teresa de la Parra was accused of undermining the morals of young women with this tale of a passionate woman who lacks the money to establish herself in the liberated, bohemian society she craves. Yet readers have kept the novel alive for decades, and this first English translation now introduces its heroine to a wider audience.