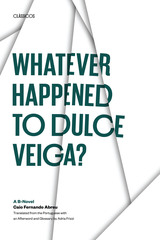 Whatever Happened to Dulce Veiga?
A B-Novel
By Caio Fernando Abreu
University of Texas Press, 2001
A forty-year-old Brazilian journalist reduced to living in a dilapidated building inhabited by a bizarre human fauna—fortune-tellers, transvestites, tango-loving Argentinean hustlers—is called upon to track down and write the story of Dulce Veiga, a famous singer who disappeared twenty years earlier on the eve of her first big show. Thus begins a mad race through an underground, nocturnal São Paulo among rock bands with eccentric names, feline reincarnations of Vita Sackville-West, ex-revolutionaries turned junkies, gay Pietas, echoes of Afro-Brazilian religions, and intimations of AIDS . . . Constructed like a mystery, the novel unravels over a week, evoking a decadent and contaminated atmosphere in which the journalist’s own search for meaning finds its expression in the elusive Dulce Veiga, who constantly appears to him as if in a dream, her arm pointing heavenward. Whatever Happened to Dulce Veiga? is a descent into the underworld of contemporary megalopolises where, like the inside of a huge TV, life intermingles with bits of music, film clips, and soap opera characters in a crazy and macabre dance, moving toward a possible catharsis.
[more]