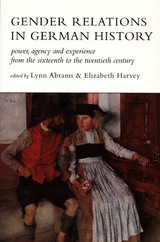 Gender Relations in German History
Power, Agency, and Experience from the Sixteenth to the Twentieth Century
Lynn Abrams and Elizabeth Harvey, eds.
Duke University Press, 1997
This collection of essays by scholars from England, Germany, and the United States brings together important and innovative work on gender relations in German history from the early modern period to the 1950s. Offering fresh insights and challenging interpretations, the essays demonstrate how the norms of political, social, and sexual behavior for both sexes are the objects of regulation and control, and are matters of conflict, debate, and negotiation. A substantial introduction reviews the historiography relating the major themes of the collection.
Topics include childbirth, abortion, and the female body in early modern Germany; the roots of German feminism; gender, class, and medicine during World War I and during the Weimar republic; female homosexuality during the Nazi period; East and West German reconstruction following World War II and the formation of a gendered consumer culture.
This book will stimulate readers to think more deeply about the importance of gender in German history, and prove to be an invaluable resource for those interested in women’s studies and in German and European history.