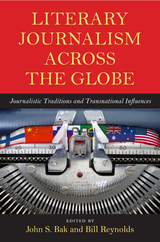 Literary Journalism across the Globe
Journalistic Traditions and Transnational Influences
John S. Bak
University of Massachusetts Press, 2011
At the end of the nineteenth century, several countries were developing journalistic traditions similar to what we identify today as literary reportage or literary journalism. Yet throughout most of the twentieth century, in particular after World War I, that tradition was overshadowed and even marginalized by the general perception among democratic states that journalism ought to be either "objective," as in the American tradition, or "polemical," as in the European. Nonetheless, literary journalism would survive and, at times, even thrive. How and why is a story that is unique to each nation.

Though largely considered an Anglo-American phenomenon today, literary journalism has had a long and complex international history, one built on a combination of traditions and influences that are sometimes quite specific to a nation and at other times come from the blending of cultures across borders. These essays examine this phenomenon from various international perspectives, documenting literary journalism's rich and diverse heritage and describing its development within a global context.