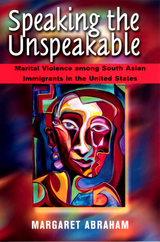 Over the past 20 years, much work has focused on domestic violence, yet little attention has been paid to the causes, manifestations, and resolutions to marital violence among ethnic minorities, especially recent immigrants. Margaret Abraham’s Speaking the Unspeakable is the first book to focus on South Asian women’s experiences of domestic violence, defined by the author as physical, sexual, verbal, mental, or economic coercion, power, or control perpetrated on a woman by her spouse or extended kin. Abraham explains how immigration issues, cultural assumptions, and unfamiliarity with American social, legal, economic, and other institutional systems, coupled with stereotyping, make these women especially vulnerable to domestic violence.

Abraham lets readers hear the voices of abused South Asian women. Through their stories, we learn of their weaknesses and strengths, and of their experiences of domestic violence within the larger cultural, social, economic, and political context. We see both the individual strategies of resistance against their abusers as well as the pivotal role South Asian organizations play in helping these women escape abusive relationships.

Abraham also describes the central role played by South Asian activism as it emerged in the 1980s in the United States, and addresses the ideas and practices both within and outside of the South Asian community that stereotype, discriminate, and oppress South Asians in their everyday lives.